Dacre, Son & Hartley has deep Yorkshire roots, dating back to 1820 when John Dacre traded as a shoemaker and collector of taxes. 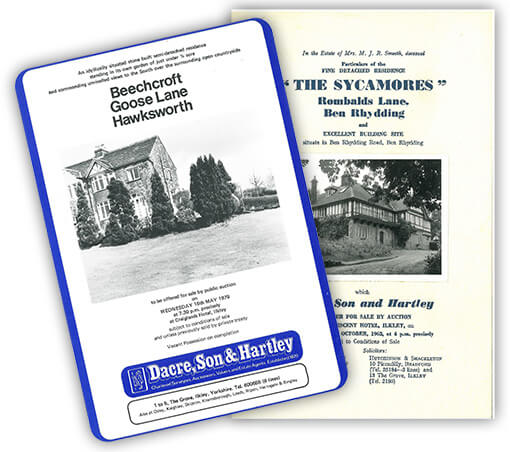 John Dacre originally operated from Bramhope but in 1847 moved to premises on Bondgate, Otley before again moving within the town in 1850 to Bridge Street. John Dacre died in 1860 and the firm was taken over by his son who coincidently was born in 1820 - the year the firm was founded. Records of the early days show dealings in furniture, linen and plates along with auctioneering and the valuation of personal chattels. The firm also became established within the agricultural community and was engaged in the valuation of farmland, standing crops and livestock.

John Dacre was succeeded by his eldest son who continued the agriculture and live stock valuation business but also started an auction mart, complete with sale ring, on the west side of Station Road, Otley - a business that became known as Otley Livestock Auction Mart. In 1881, the firm moved once again, this time to Station Road, Otley, on a site opposite the present offices.

In 1906 Thomas Hartley had a established a business in Ilkley which included the sale of household furnishing, auctioneering and undertaking. His son Douglas succeeded him in 1924 who took over the auctioneering role. Just four years later Douglas Hartley moved to premises on The Grove in Ilkley. This was followed by direct competition with Douglas Smallwood's business when Hartley opened an office in Otley, virtually opposite his competitor. In 1936 the two practises merged under the title Dacre, Son & Hartley. Offices soon followed in Skipton and Keighley.

In 1926 Alleyne W S Berry of Hull acquired the business following the death of John William Dacre, and he continued as sole proprietor until 1932 when the business was sold to Douglas H Smallwood. The character of the business began to change from its estate agency and agricultural background to include the sale and letting of industrial and commercial premises. New areas of expertise were introduced including rating appeals and the valuation of industrial plant and machinery for insurance purposes. This work took staff to Europe and even Africa.

The war years disrupted the business considerably. Douglas Hartley was engaged in war damage claims for the Government in Hull, whilst Doulgas Smallwood operated both the Ilkley and Otley offices, with John Smallwood at Keighley. The present Head Office was acquired immediately following the Second World War and in 1967 the present Skipton Office was opened on the cobbled Sheep Street.

The 80's saw acceleration in the growth of the firm with the establishment of offices throughout the Yorkshire region. This caught the eye of the Abbey National who in 1989 acquired the firm as part of the Cornerstone Group of estate agents. The selling partners of the firm, however, insisted the business name Dacre Son & Hartley should be retained - a unique state of affairs within Abbey National's estate agency holding.

1995 saw further change when a management buyout returned the firm to local ownership with Jim Horsley as Chairman and Martin Thompson as Managing Director.

The firm remains a private limited company with the majority of the shareholders embedded within the business and taking very much a hands on approach. Twenty one offices now provide comprehensive coverage in the core Yorkshire region, covering the market towns of the Yorkshire Dales including properties for sale in Skipton, Settle and Pateley Bridge, whilst other offices cover Wharfedale, the Aire Valley, Leeds, and to the south and south west of Bradford in Elland and Morley. Harrogate, Knaresborugh, Ripon and Wetherby are also popular communities where the firm offers prominent representation. Residential Sales continue to make up the largest proportion of the business, however, land development, healthcare investment, commercial property management, commercial agency and specialist professional services now provide a significant element of the company turnover.