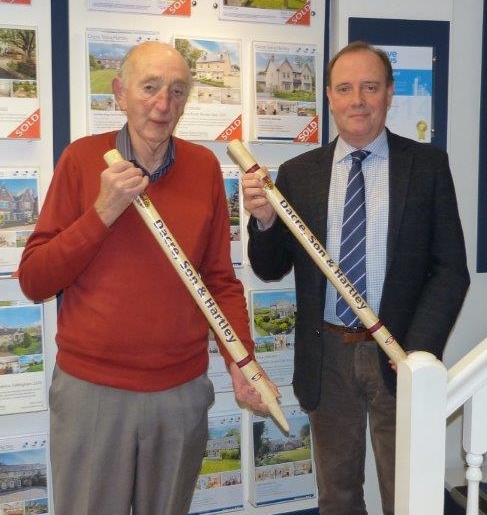 A local cricket club has launched an innovative sponsorship package that will see its stumps sponsored by Dacres.

Area director Paul Baxter, who heads up our Wetherby office, says: “We have been big supporters of Spofforth Cricket Club for more than 15 years. Initially we sponsored the original scoreboards and have also sponsored specific teams in the past too. When the club came to us with this interesting new sponsorship opportunity we were delighted to back it. The club is an integral part of the community in which we operate, and we are more than happy to play our part supporting such talented players.”

Spofforth Cricket Club, which is located on School Lane, has both senior and junior teams, and more than 260 members. The club fields first and second senior teams that play league and cup cricket respectively in the 1st and 6th divisions of the Nidderdale Amateur Cricket League.  In addition, two teams play in the Harrogate Evening League.

The club has a prodigious record of success within both league and cup competitions and also has a thriving junior membership which is both Clubmark accredited and a YCB Focus club with 17 ECB qualified coaches and teams representing all age groups in the Nidderdale Junior Cricket League.

Terry Kavanagh, from Spofforth Cricket Club, says: “We know, from records in the village, that cricket has been played in Spofforth since at least 1854 and it is likely therefore that our club is one of the oldest in the area. It’s also one of the most well supported clubs with so many dedicated volunteers, coaches and players, but we also need to generate an income to cover our overheads, and we really value Dacres’ long-standing support over many years. We thought the stump sponsorship was a refreshing idea and it has taken pride of place on the pitch.”

Paul adds: “Our business prides itself on getting involved with the local community and has several sponsorship partnerships with a number of clubs and organisations including Harrogate Cricket Club and Leeds Beckett Athletics Union.”